How to protect your PC with Free anti-virus software 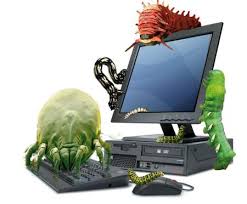 It is essential to ensure your PC is protected against various forms of Malware, but in particular a virus. If it were to become infected it would very likely mean you would loose all or part of the data you have on your PC. Here we look at some great free antivirus programs for Windows PC, laptop and tablet.

Every Windows PC, laptop or tablet needs security software. And that should include an up-to-date firewall, antivirus and anti-spyware. That doesn’t automatically make your PC secure, of course. Human behavior is such that an online PC or laptop is never entirely safe – but solid security software is a good start, and it will protect you from all but the most sophisticated and well directed attacks. Times are hard and not everyone wants to shell out €60 or more a year for the top-rated security products. The best performing internet security products from the likes of Norton and BitDefender offer best-in-class antivirus engines. But their principle benefit is additional features that help you secure data and make informed decisions about potential threats. You can get by with free alternatives. There is an additional risk, but a major cost saving. Here then is our list of the best free antivirus software, based on independent testing from AV-Test.org.

We’re not taking these in any order, but we have to start with Microsoft’s own AV product. If you buy a computer running Windows 8 it comes with Windows Defender installed. Windows Defender in Windows 7, Vista and XP is a slightly different thing, but if you install the free Microsoft Security Essentials it adds the same level of protection. As an integral part of Windows it is easy to use. So if Microsoft makes its own free Windows antivirus, why would you ever pay for security software? Well, it’s fair to say that the protection isn’t the best on the market, although it is far from terrible. In AV-Test.org’s most recent tests Windows Defender picked up 99 percent of known threats, and in January 2013 it found 98 percent as against an industry average of 99 percent. More important are unknown or so-called ‘zero-day’ threats. Here Windows Defender 4.0 picked up only 82 percent of threats in January 2013, and dropped to 81 percent in February. That’s not a catastrophic result, but you should want better protection than that and the industry average is 95 percent. AV-Test awards Microsoft only 2/6 for protection, and we can’t argue with that. The story is better when it comes to system performance, where Defender gets 3.5/6. It wil have an impact on your PC’s performance, and it’s more of an impact than the industry average. But it won’t cripple your PC. Indeed, with Windows 8 PCs one of the benefits of the better paid-for security software products is that by disabling Windows Defender they make your PC faster. An odd situation, but there you go. Where Windows Defender excels is in false positives. Simply, in AV-Test’s testing it never produced a single warning for a false threat. That puts it out ahead of virtually every other security software product. Clearly, however, protection is the key factor. So overall we’d give Windows Defender 2.5 stars. It offers some protection, but not enough. 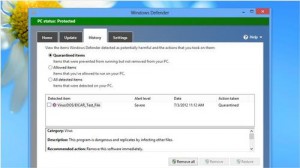 Let’s start our look at third-party programs with Avast’s Free Antivirus. Here the story is much more positive. Avast matches Windows Defender’s decent performance result, and also fails to give any false positives. So far so solid. But Avast offers much better protection than Windows Defender. Indeed, it offers great protection. In tests Avast’s Free Antivirus found 99 percent of all know threats, which is the industry average (including paid-for security products). More important is the way Avast deals with zero-day threats. In January it picked up 98 percent of unknown security threats, and in February 2013 100 percent, as opposed to an industry average of 95 percent. Kudos to Avast, to which AV-Test awards 5.5/6 for protection. That’s good enough for us. We found Avast to be perfectly straightforward to use, so we’d gladly recommend this free software with 4.5 stars. 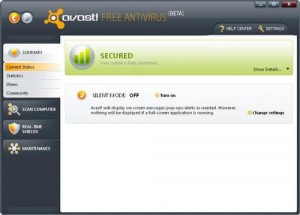 AVG is almost up there with Avast in terms of the all-important protection. In both January and February 2013 it detected 99 percent of the known threats thrown at it by AV-Test.org. That is the industry average. Critically, it picked up 98 percent and then 100 percent of unknown threats. Avast is just on top there, but AVG Anti-virus Free Edition’s protection performance is excellent. AV-Test awards 5.5/6 for protection. System performance better than that of Avast, however. AV-Test offers a decent score of 4.5/6, so if you have an under-powered PC this may be a good choice for you, given the protection score. Finally, in terms of false positives AVG kicked up a handful over the two tests in January and February 2013, but nothing that would cause any concern. It’s a great free product and we award 4 stars. 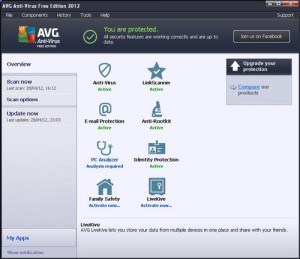 One other free security program worth your consideration is Panda’s Cloud Antivirus FREE. It’s a good all rounder offering solid protection. In the January- and February 2013 tests it dealt with 100 percent of the known threats AV-Test pushed in its direction. It wasn’t quite so good at dealing with zero-day threats, although it outperforms Windows Defender, picking up 95 and 94 percent of threats over the two months. That’s just about industry average. Add to this an excellent usability score in which Panda failed to produce any false positives, and a decent performance score of 4/6 and you can see that Panda is a good free antivirus. We award 3 stars. 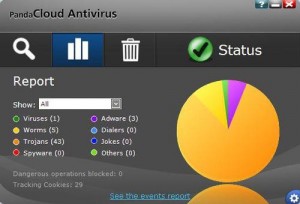 There are other free antivirus products that are worth considering as extra layers of security. You can bolster your free AV setup with one of Malwarebytes’ Anti-Malware Free or Comodo Cleaning Essentials – both are good for cleaning up malware infestations after the event.